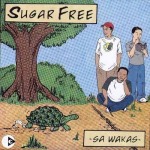 Can’t think of any other song that starts and sounds like ‘white lace and promises’ then puts a dagger into your heart right on the third line and then totally drowns you in the chorus. That vaguely optimistic, vaguely in denial “Ito ang unang araw na wala ka na”, reminds me of another break-up song, Beck’s “Guess I’m Doing Fine”, though it doesn’t quite reach the same level of tonal ambiguity as “Unang Araw.” There’s also this “Monkey Wrench” kind of break-up catharsis in there but it’s more sad/re-assuring than angry. It’s like remembering your first day together and then realizing this is the first day after your last. Sugarfree wrote songs about love that would make you swear never to fall again. And yet also tells you how sad it is to be alone (“Mariposa”), among other things (“Insomya”, “Fade Away”). Years before Junot Diaz’s The Cheater’s Guide to Love, Ebe Dancel sings about love that would linger on long after the relationship ended (“Burnout”). With a simple last-minute switch from past to future tense, Ebe gave us that immortal ‘the half-life of love is forever.’ A