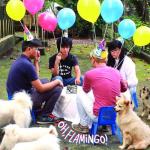 They have some really nifty guitar-indie pop, with some odd, maybe not African-inspired beats (maybe) that you’d wish they have something more interesting to say. Or at least, interesting way(s) to say them. Maybe their latest, “Parara,” “Naubos Na” were attempts in trying to do that. Or maybe not. Maybe it’s just wishful thinking because, here’s a band narrowing the gender gap among other things (i.e., they got a cute girl drummer). So I just turn up the volume for those tasty guitar parts. Though I wish some real feelings poked through more often, like in the song they’ve curiously hidden, after the “final track.” B+